If recent past has been any indication, then it is a certainty there are growing expectations from testers and developers alike, to take quality head on, as a joint feature. More so in mobile app testing projects where changes are required faster than ever.

As part of DevOps practices, it’s has become imperative for developers to run as many tests as possible with every code check-in. These tests could be automated functional, API or Unit Tests. Some of the popular tools to used by Developers to create their tests are Espresso, XCTest and Appium.

Following are some the Challenges faced by developers:

Try taking a look at a typical developer’s cubicle and you will see a series of mobile devices connected with several long USB cables running into computers. It does get frustrating to see others furiously plugging USB cables in and out of the mobile devices for App Testing on various devices.

Many of the organizations are shifting to device cloud to provide their teams access of right Mobile Devices. Device cloud are solving the need of test teams but provide limited debugging capabilities and hence not preferred by Developers.

To directly address need of Developers, pCloudy recently introduced Device Tunnel, which fully allows developers to take complete control of the device in cloud. This unique solution provides access of cloud devices through the Android Studio or Eclipse IDE and the command line tool installed in your computer.

It works as if Device is connected directly to your computer through a USB cable. From the point of view of tools like Android Studio or Eclipse, a cloud-based device appears physically attached. In reality, the Device Tunnel communicates with pCloudy’s servers over Internet. 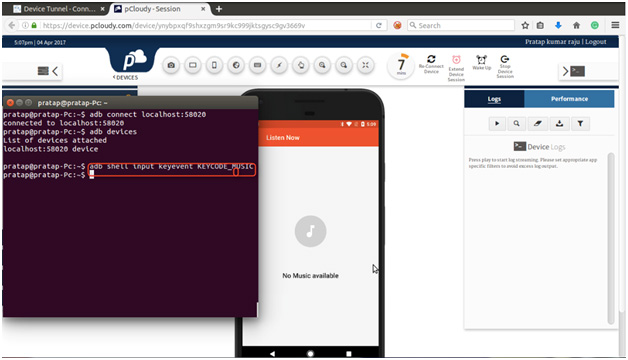 Once a connection is established, the developers can perform the following actions on these devices:

It is undeniable that developers and testers need quicker access to diverse devices for the brisk evaluation of app and debugging. App Testing during Development is important.  Device Tunnel enables both sets of engineers to instantly connect to any device hosted on cloud and run faster debug sessions and thereby, maximize the quality of their build cycles.

See here for more on how to connect any device on pCloudy using Device Tunnel. pCloudy is the most powerful cloud based App Testing Platform. It has the most comprehensive set of Mobile Devices and Tools to Improve Quality of your App. pCloudy provides single click access to 500+ Android and IOS devices directly from your browser. You can use these real Mobile Devices to click-and-perform Manual Testing and Automation Testing for your App. You can also Integrate pCloudy with CI for continuous Automation.

Find out more about @pcloudyssts