Last time we got to know: Andrés Curcio, Thomas Mantsch and Richard Boettcher.

Ruud is a software testing consultant with Polteq Test Services in the Netherlands with a wide variety of interest areas in testing.  Ruud also happens to be the Chair of EuroSTAr 2015 which is happening in Masstricht in November. Submissions are currently being accepted to speak at the Conference. If you are interested, you can submit here. Recently Ruud took part in a Q & A webinar for those that had questions about the submission process. You can catch up on that webinar here. 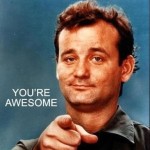 Morne is a software tester with Navinet in the U.K. He came into testing from a background as a software engineer. He got more involved in testing though and has built up his experience in the role. Morne is obviously a big fan of Bill Murray or either he just likes complimenting people alot. If Morne is a Bill Murray fan, he should check out the Favourite Film thread on TEST Huddle. Mariana is one of the newest members of TEST Huddle. She works in Colombia for the company SQA S.A. as a software tester. Her interests are in the area of functional testing and webApp  or “pruebas funcionales y WebApp” in her native Spanish. Google Translate is a great tool! It’s great to see so many international members of TEST Huddle too. Members who are testing the world over!