Last time we got to know: Shmuel Gershon, Craig Lynch and Yogananda Jeppu. 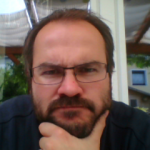 Patrick Prill aka TestPappy is a software manager and was for the last ten years. He is a blogger too which you can find here. His return to blogging  and reading about testing was inspired by a webinar in October 2012  by EuroStar featuring Michael Bolton, about “Regression testing”. Pappy is a reference to a nickname he picked up in one of his own companies.  He is also on Twitter too. Bryan is a software testers with an interest in test automation based in the Netherlands working with Sioux Embedded Systems. Bryan introduced himself to the community in the “How did you Get Involved in Software Testing” thread with a lovely story about how he started programming at the age of 10 after getting experience with some early Sinclair computers (ZX-81, Spectrum and QL). If you haven’t joined the conversation yet, why not introduce yourself. Declan O’Riordan works as a test consultant specialising in  security testing working with Testing IT.  Declan hasbeen  featured a few times on TEST Huddle this week. He presented the webinar on the “What? Why? Who? How? Of Application Security Testing” recently which you can find the discussion here. He also features in the thread that features the quiz that was part of the “Best of 2014” Ebook.  It’s a True or False quiz on Test Huddle members. Give it a go!