Mining cryptocurrency is not as convenient and inexpensive as it used to be. With miners crowding blockchain, the quest to complete transactions and getting a reward has become increasingly difficult. Chances of producing a hash in order to add a new block to the chain are now only 1 in 13 trillion. Hence, 80 to 90 percent of mining is done by a pool of miners or enterprises as it requires powerful hardware and electric power and their costs often trump the revenue

Blockchain technology is not only about this. Its application in property handling, internet of things, asset management, insurance claim processing, healthcare records, patents, and copyrights, etc., is already transforming traditional frameworks with its transparent, immutable, and decentralized structure.

Meanwhile, there is another revolutionary technology that has taken the world by storm since high-speed internet connectivity has become rife i.e. Artificial Intelligence (AI). What if these two hegemons are melded together? We’re going to have an awesome fusion of AI and blockchain, with AI drawing on patterns and generating predictions through massive stores of accurate and immutable information collected via blockchain, eliminating even a smidgen of chances for errors.

Here’s What Eventualities This Alliance Can Unleash:

Currently, we’ve centralized AI monopolized by big fours i.e. Amazon, Apple, Facebook, and Google. These giants have accumulated vast amounts of datasets that have a tremendous influence on our lives. Moreover, they are not as transparent with their information as they’d like us to believe; their absolute monopoly in knowledge mining has secured them unprecedented power. As can be witnessed by Facebook’s hearings over letting political candidates run ads unchecked by third-parties and misuse of user’s data, which have had an all-encompassing impact on the fate of entire nations. The concerns have arisen over whether the young CEO can handle that much power on his hands.
Meanwhile, there are chances those knowledge deposits are biased and incomplete since it doesn’t have any third-party source input.
Blockchain can imbue its elements of transparency, immutability, and decentralization into AI that were previously missing from the AI model. Neuromation, SingularityNET, and OpenMined are among such entities that are working towards a brainier AI and economical knowledge mining.

AI requires data in order for it to develop, which is currently not feasible for smaller entities. But the infusion of blockchain can make data distribution fair as it lets us secure our data cryptographically and use it any way we like without letting our privacy being compromised by the tech giants. AI systems run by smaller companies can purchase the data straight from its creators, called the data marketplace. Sophia, Hanson Robotics’ AI, with the help of SingularityNET is surpassing limitations faced by Amazon’s Alexa as it is not controlled by a centralized authority, rather it can access diverse third-party AI resources in order to improve itself.

With copious amounts of data stored in blockchains, AI can improve its prediction models. Since data is the key to a smarter AI, traditional operations involving humans are sometimes inaccurate and often unverified that can induce chances for errors and biases in AI’s predictions.

By mining data in blockchain for a specific industry, AI can improve business decision making by determining answers like which demographics to offer their products to, which product’s purchase correlates with that of another, etc. AI can even help governments develop better health and immigration policies with accurate tracking of populations and their health, particularly for underdeveloped countries.

AI and Blockchain Alliance Is Not Without Challenges

The initiative needs the support of big four entities that form the current monopoly. Without their support things could become a little tough for other smaller entities, though it hasn’t stopped them from soldiering on.
While the big four are diving into their own blockchain and AI experimentation, the question remains whether these entities can be incentivized to let the balance come forth in the power structure? 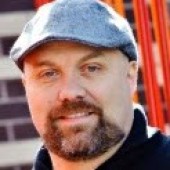 Find out more about @roberttjami