There’s a widespread acceptance that enabling functional UI test automation will save a lot of time. The QA team is usually the last to experience the product in the normal process of mobile app development and with time pressures, are regularly asked to save time. They are the ones who are focusing on the exploratory and user acceptance testing. While this may look possible, there’s some hefty utilisation of resources when writing and maintaining the script. Sometimes, people can criticise UI automation testing for the level of flakiness it brings into the process.

The idea is to overcome complex challenges resulting out of complex workflows and the amount of time it takes. Automated UI testing is the preferred alternative that many QA professionals will opt for. But again, this method is not a 100 per cent error-proof. There are times where even the automated UI testing ends up becoming a time-consuming process when adding up the cost and failing to deliver the desired result.

Opting for risk-based testing enable you to prioritise testing those elements that are running a higher risk of failure. Also, these elements are set analogically with those that have negative consequences first in case any errors occur.

Consider the following in such cases:

Getting the efficient UI automation results is possible by following the automation pyramid.

The left-hand side of the image an ice cream represents the sweetness and temptation where it can jeopardise the automation appetite. Following such pyramid can create friction since it puts some heavy weight on the UI level automation. This technique engages a plethora of fragile tests. And because such tests have higher breakage chances, focusing on the automated unit tests helps you to prevent bugs. It can also eradicates many of them almost instantly as you manoeuvre through the SDLC.

Here’s a list of such commonly faces challenges by testers when in the process of automating mobile app UI testing. Make the most of the mobile app testing services along with the recommended approach to resolve them.

One of the best ways to address the UI automation testing challenges is to pick up the right platform. Ideally, the test automation framework should be able to adapt to the agility required in such a dynamic project. Plenty of other frameworks are at disposal in the vast and ever-evolving test & automation industry.

If you need to pick the best-suited one for the agility then go with UI Page Maps. The major issue it resolves is of maintaining the UI automated test scripts and keeping it in a re-usable mode.

Solution: Consider Image comparison to being an important aspect

Comparing images is one of the crucial factors when it comes to creating UI scripts. Most of the testers may completely ignore this while scripting automated tests. There are chances of pixel variances in terms of size, colour, shape and plenty of other image components forming up the web elements. Best if you consider image comparison while running the automated UI test. You could consider choosing TestingWhiz for this purpose.

At first, the point we discussed above on how choosing the right framework for UI automation testing is important. But if you cannot do that, ensure opting for a right automated tool. While they come to rescue in dire situations they come with certain costs attached to it. Go for buying a UI testing to automate the process and you will be able to rely on them for below-mentioned stuff:

Solution: Utilising Object Repository
When you intend to maintain the test report then it is always ideal to utilize the repository of the shared object. This also means you will be running less number of test scenarios and for the automated UI test cases during the early testing stage.

What it does is that you will ultimately balloon the rate of successful test case while plummeting cost of test maintenance resulting in improved test coverage.

Frequent changes to UI in terms of logic, functionalities or even feature will create issues in maintaining automated UI scripts. An ideal solution to this issue is vying for a codeless automation testing tool.

This will certainly make things smoother when it comes to frequent code alterations. You will also be saving a lot of time in such scenarios and along with the cost involved in experimenting the right UI testing tools. Ultimately the program managers will be happy to see this choice boosting their ROI.

Regardless of the tools and processes your equip UI testing, it is essential to keep in mind that testing has no end. Never consider the process of test automation simply a solution for buggy system. Try mitigating the over-reliance on UI automation testing as a standalone method and rather use it as a concurrence technique with other non-automated tests. 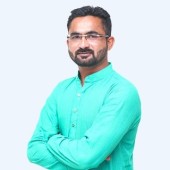 Noman Shaikh is a Digital Marketing Head at Fixlastmile which is known for developing top-notch last mile delivery Software. He believes in sharing his strong knowledge base with leaned concentration on entrepreneurship and business.

Find out more about @nomanshaikh