To help you decide which tools work best for your API automation tests, this article presents a review and comparison of three popular tools for API testing: SoapUI, Postman, and Katalon Studio. SoapUI and Postman specialise in API testing while Katalon Studio provides a complete solution for API, Web, and mobile app testing. SoapUI is widely cited as a top choice when it comes to API testing. It is a headless functional testing tool specifically designed for API testing. SoapUI supports both REST and SOAP services. API automation testers can either use open-source or pro versions. The pro edition has a user-friendly interface and several advanced features such as assertion wizard, form editor, and SQL query builder. SoapUI is a tool of ReadyAPI suite, offered by SmartBear.

The tool provides many advanced features for API testing, including

SoapUI is distributed as Open-source and Pro versions ($659/year for medium and large teams).

Postman emerged as a popular automation tool for API testing after having only been known as a browser extension for API validation. Postman can be installed as a browser extension or a desktop application on Mac, Linux, and Windows. It is used not only by automation testers for API tests but also by developers for developing and validating APIs. It has evolved, in fact, as an environment to develop and test APIs. Some notable features include:

Postman is affordable as the product is offered in three editions: Postman (free), Postman Pro ($8/month), and Postman Enterprise ($21/month).

Katalon Studio is an integrated environment to generate and execute API, Web-based GUI, and mobile apps automation tests. It has a rich feature set for these types of testing and supports multiple platforms including Windows, Mac OS, and Linux. By integrating Selenium and Appium engines with all needed components, built-in keywords, and templates, Katalon Studio provides a unique environment for both testers and developers to perform API and Web automation tests. Some notable highlights of the tool:

Katalon Studio is free of charge although it is not open-source.

Dedicated support services, for instance, troubleshooting and consulting services are offered in forms of Business Support and Enterprise Support. 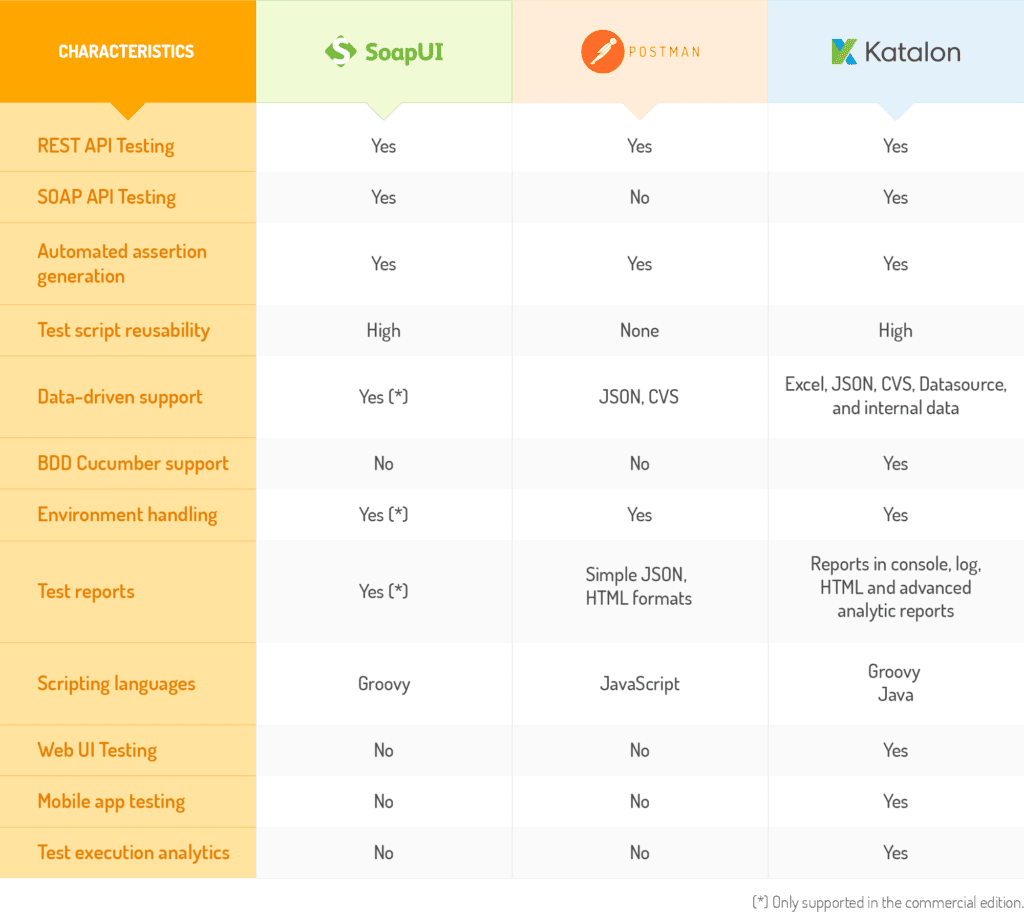 REST and SOAP are the dominant API types, accounting for more than 95% of all API/Web services according to the State of API Integration Report. Katalon Studio and SoapUI support both REST and SOAP APIs while Postman handles only REST requests. It should be noted that the overwhelming majority of API implementations (83%) follow the REST protocol.

BDD Cucumber support: this capability allows test cases to be written in natural languages, which helps improve the collaboration between technical staff and business stakeholders. This is a Katalon Studio’s distinct feature not seen in the other tools.

Scripting languages: all tools support languages based on Java.

Web UI and Mobile app testing: in developing a multi-platform application, the team performs Web UI and mobile app tests besides testing APIs. So, supporting these types of test is an advantage of Katalon Studio over Postman and SoapUI, as it allows developers and testers use the same tool, share and collaborate on the same test artifacts.

This article provides a review of 3 popular and promising tools for API test automation by comparing SoapUI vs Postman and Katalon Studio. Each tool has its own pros and cons; but they are widely used by developers and testers for their API testings. (Read more Top 10 API Testing Tools) Can Virtualization Transform Your API Lifecycle?

Are We Failing at UI Automation?